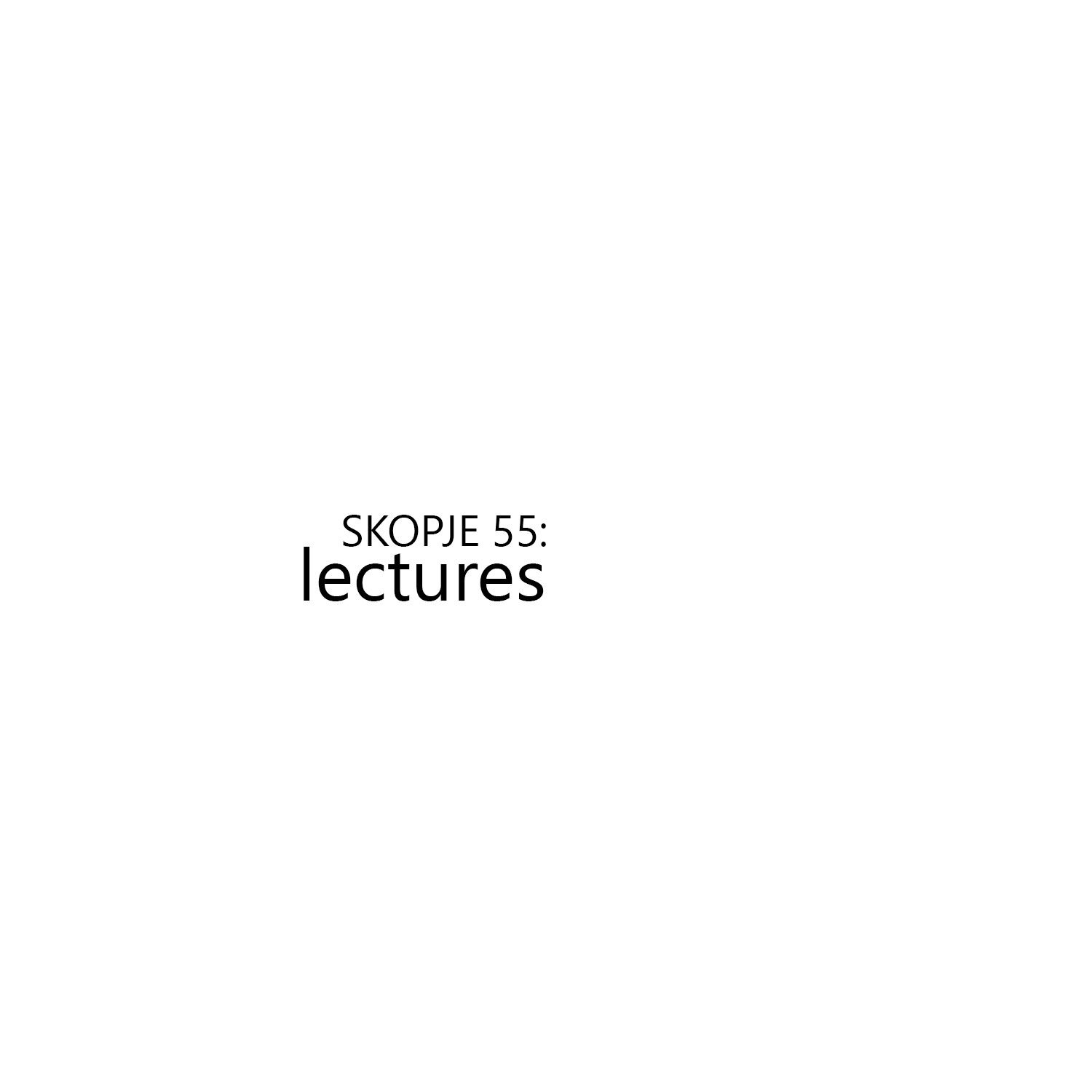 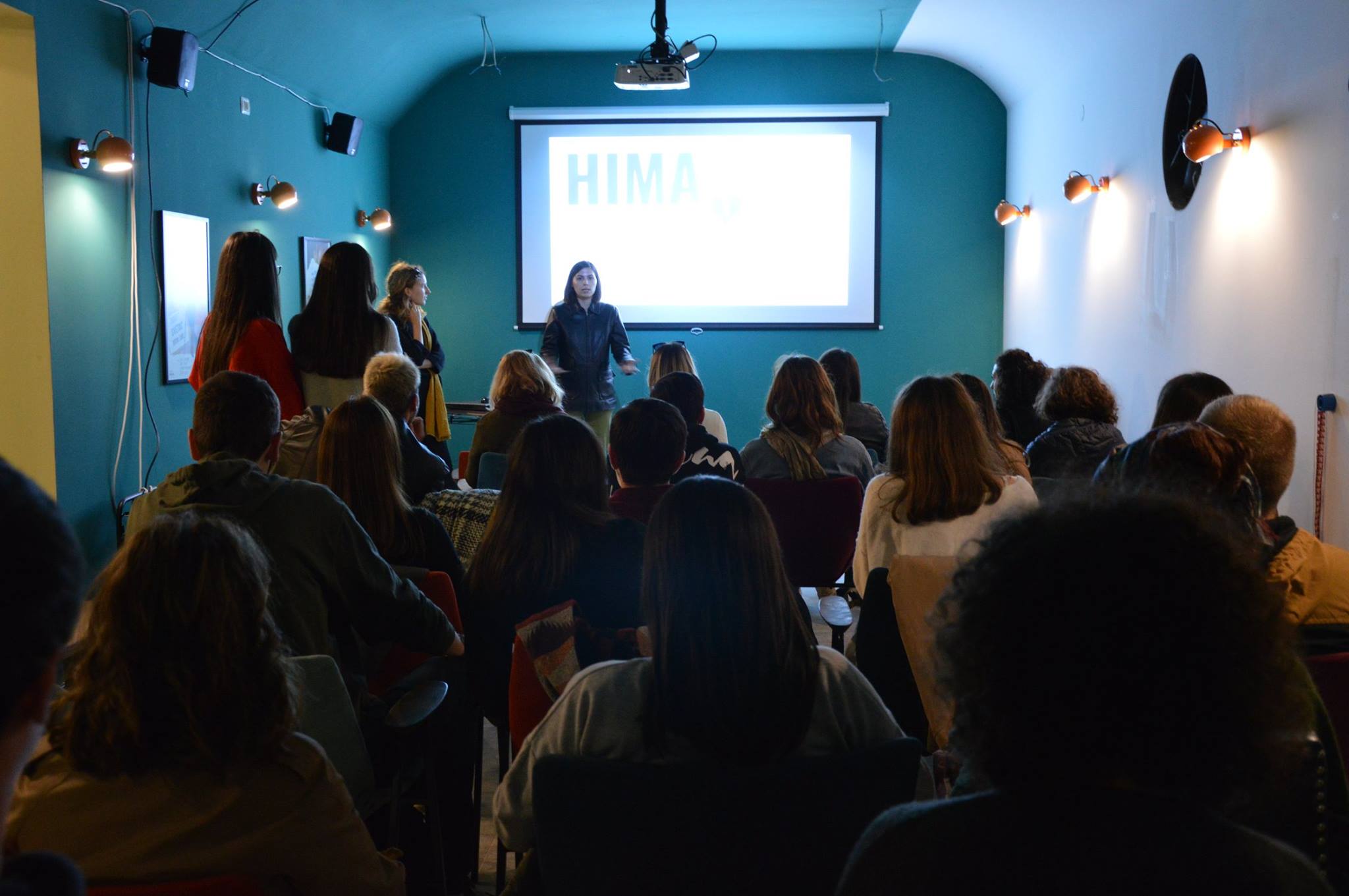 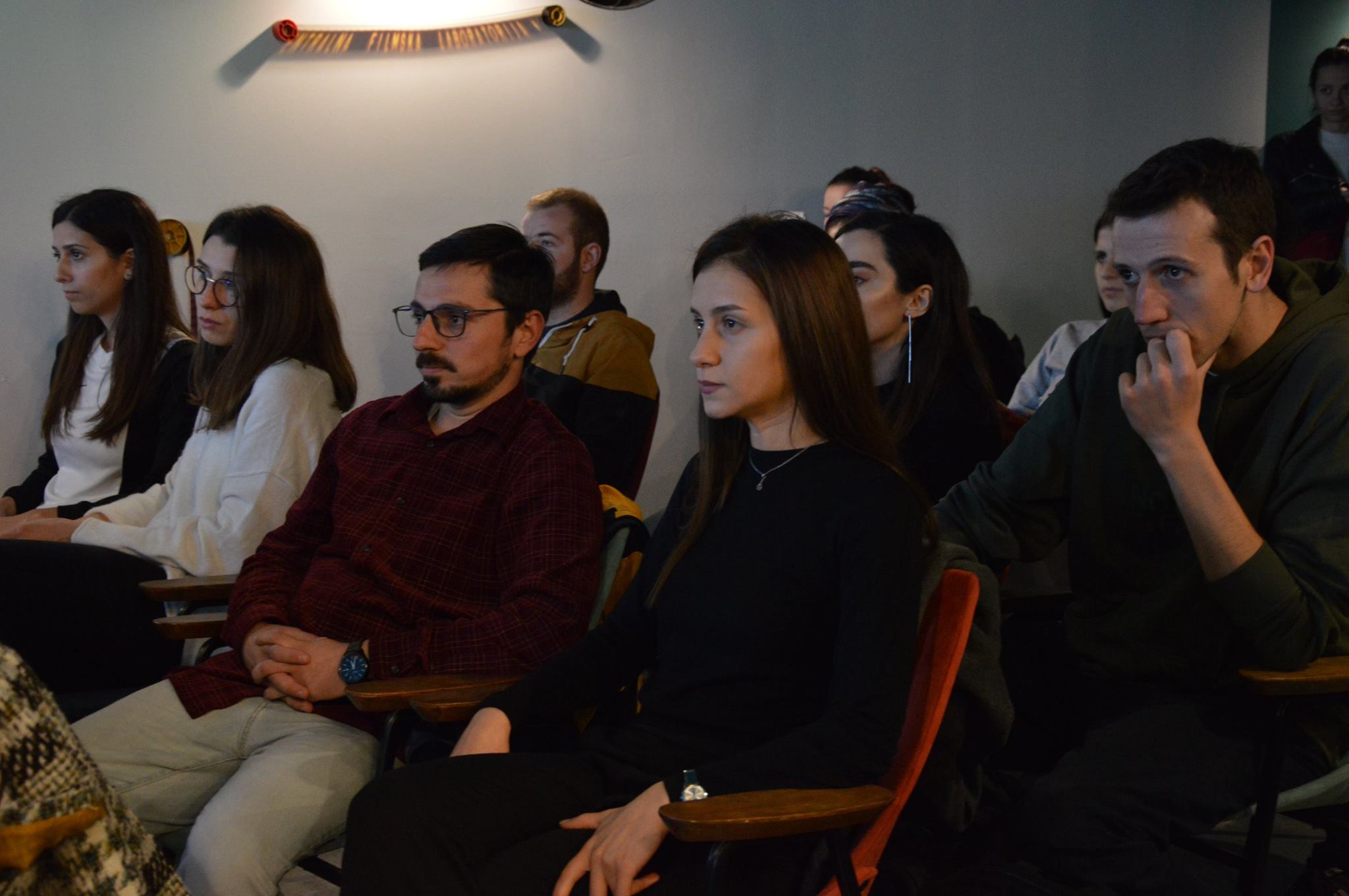 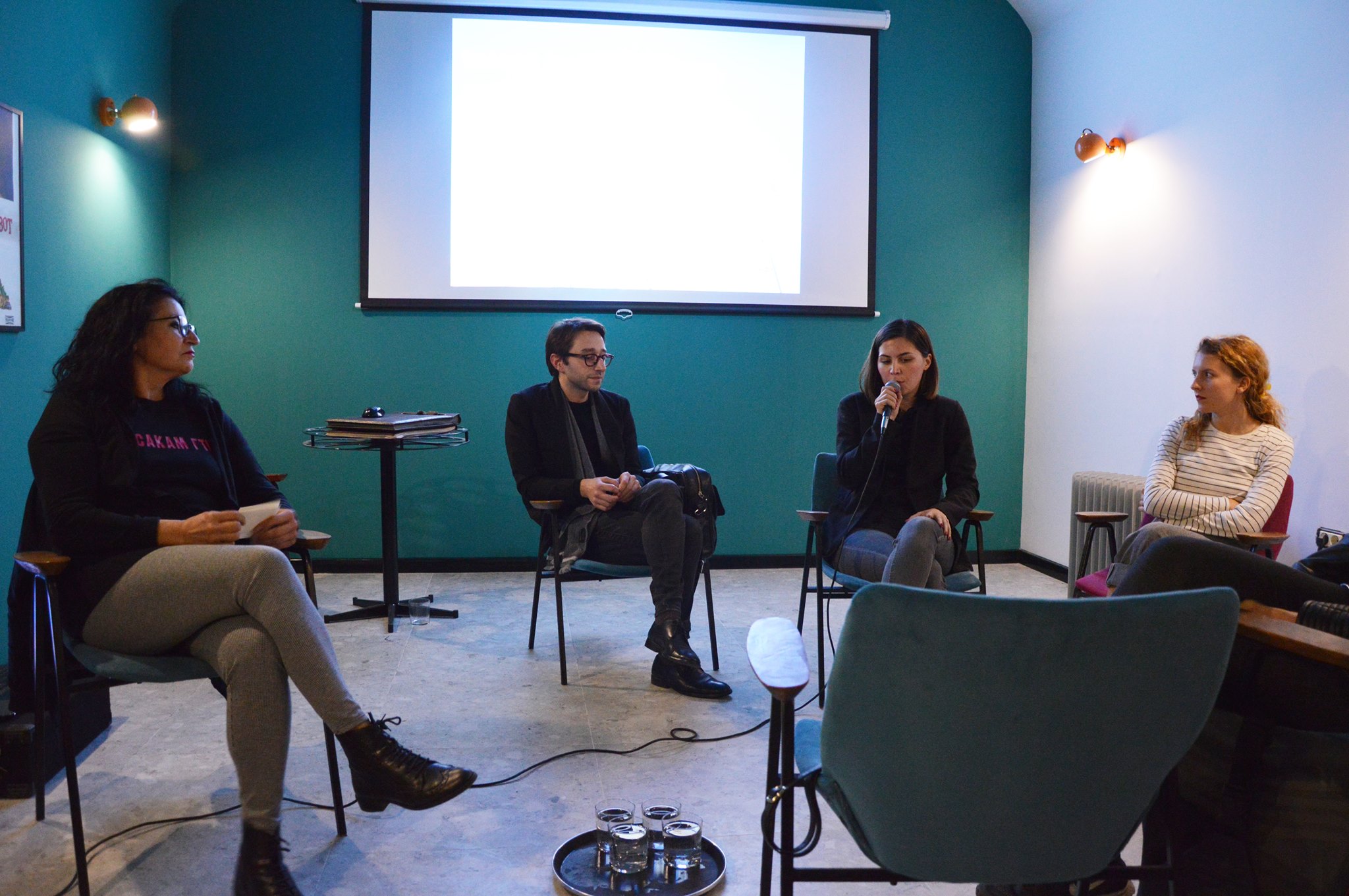 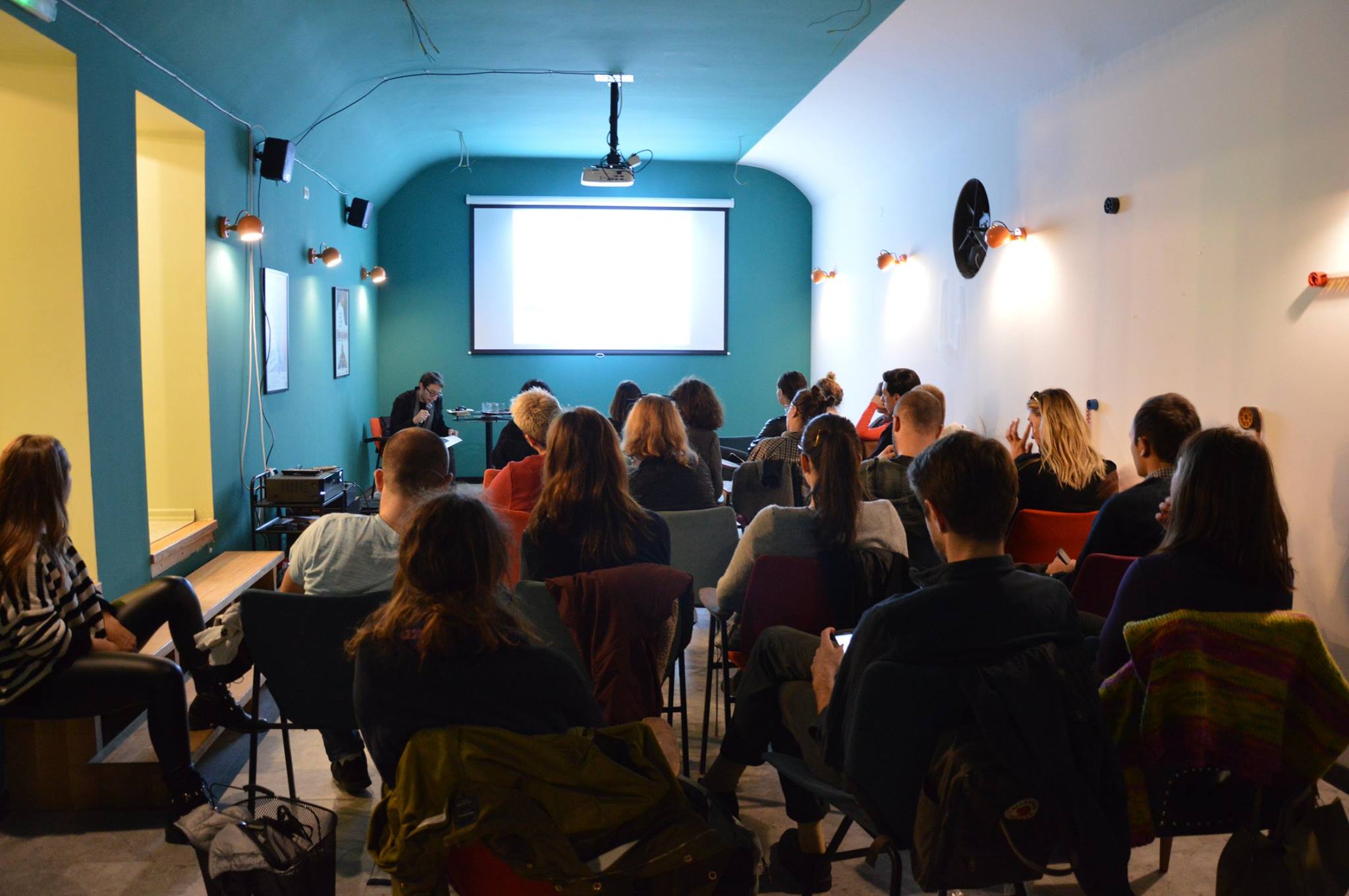 The project Skopje 55 also included 2-day lectures by successful individuals and organizations that come from and work in Skopje. Divided in 2 days (28-29/10/2018), we had the pleasure to hear about the following projects:

Hristina Sekuloska and Irena Milojeska HIMA, who shared their international experiences with the light competitions and the installation at Paratissima. They also shared this year’s INCM meeting, which, in their credit, will take place in Trpejcain Ohrid, and called for involvement by students and all interested parties. For more information, follow the Facebook page of EASA Macedonia.

Martin Panovski from Radius and AAM, spoke about the intervention on the remains of Ezerce in the City Park in Skopje and the subsequent treatment on this type of interventions. He also shared with the audience the term Baukultura under which this year’s biennial of Macedonian architecture was being discussed, as well as the importance of using this term not only in designing but also in everyday life.

Filip Koneski and Martina Steriova from MARH shared the goals for opening this website for architecture and future plans. They talked about the project Betonsko Skopje and emphasized that they support students to share their projects on this website because they have special value and sincerity and are a great inspiration for the entire architectural scene. Filip Koneski emphasized that it is important to bring architecture closer to all people, not just to be in the circle of fellow architects.

Vasil Semkovski talked about his path to becoming an illustrator and the birth of an adult coloring book Skopje 091. He motivated the audience with his speech to love Skopje, and to do what they want, with a positive thought for the city.

Darko Popovski from the bands Ego Disco and Pluto’s Doubts expressed his dissatisfaction with the insufficient supply of spaces for playing music for Macedonian bands in Skopje and presented his idea of ​​a building in which the bands will have their own room, but also the space where they can meet and share ideas. He mentioned that the former Makoteks building is currently a small version of his idea and a real need, but that he needs to work more seriously to reach this dream and make it reality.

Finally, as unexpected guests, we had representatives of the Cultural Echoes organization involved in promoting and documenting the neglected industrial buildings and their reactivation with activities needed for all citizens in Macedonian cities were included in our special pleasure.

Vlado Danailov from Arhi.Tek and Studio 90 who shared the experiences with the one-month edition that was made in collaboration with Mila Dimitrovska and was published at the Faculty of Architecture Skopje. He singled out the article “Skopje 2063” from arch.kit where we talk about Skopje in the future. He also shared the dormitory project that he worked with Elena Tasevska, who runs the studio 90, and explained the spatial qualities of rooms that have a small area in the basement of a two-roomed room worth two people. Vlado on two occasions quoted the author Vlada Urosevic, and his words about Skopje and the city.

Danica Pavlovska talked about the movement “I love the GTC” and the series of activities that took place in 2014 as a protest against placing facade on the GTC facility. She emphasized that the action was peaceful and had the goal to love and hunt the object, it was recognized by many more people than she expected and citizens of all the settlements of Skopje appeared on the event. She discussed all legal actions that were taken to protect the facility.

Maja Lozanoska from MELEEM presented the work of the organization, but from an economic and organizational aspect. She presented all the challenges that an organization faces, both bureaucratic and administrative. Maja encouraged the young audience that in order to organize an event or to set up an urban installation like those of MELEEM, it is not only to draw, but also to complete other aspects and requirements, but no matter what, this is achieved in an interdisciplinary team of young people.

Ivan Sopov, author of anti-postcards Skopje 091, read several texts from his book and alluded that he felt an urge to write about the Skopje that he loved at the moment when everyone had a negative attitude. He also quoted Vlada Urosevic, who we should all read.

At the end of the two series of lectures, there were discussions where the audience actively participated. The attendance of the event proved that such interdisciplinary discussions of people of different ages are important for our city and MELEEM will continue to organize them in the future.